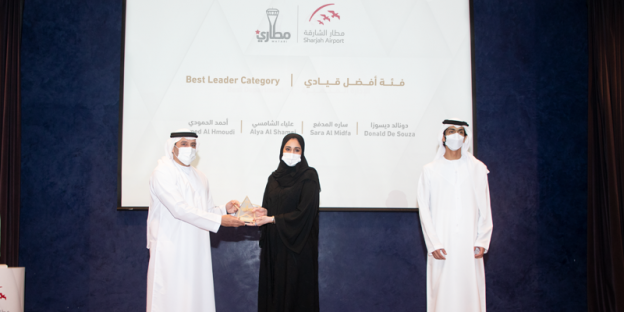 Establishing a culture of excellence
In his welcoming speech, His Excellency Ali Salim Al Midfa said: “The Matari Award comes in line with the vision of His Highness Sheikh Dr Sultan bin Muhammad Al Qasimi, Member of the Supreme Council and Ruler of Sharjah, and the follow-up of H.H. Sheikh Sultan bin Mohammed bin Sultan Al Qasimi, Crown Prince and Deputy Ruler of Sharjah and Chairman of Sharjah Executive Council, SEC, to establish a culture of excellence as a fundamental value at work, to support and keep pace with the level of development achieved by the emirate of Sharjah in various fields.”

A model for institutional leadership
Al Midfa added: “This award represents the work environment at Sharjah Airport Authority, which encourages creativity and innovation, and has become a model for institutional leadership in various fields. The Authority’s adoption of a comprehensive system of excellence places its main focus on providing happiness to employees, and achieving the highest standard of services for customers and travellers. Sharjah Airport Authority works to support talents and empower employees, as part of our mission to become a global role model in the industry. The Airport strives to provide an environment that enhances the culture of innovation and enriches creativity in daily work life.”

The highest international standards of excellence
The inaugural award ceremony was based on the highest international standards of excellence and best practises in the field. The award ceremony is a catalyst for excellence, innovation, and upgrading the level of services offered. The winners were selected based on evaluation criteria and interviews conducted by an external evaluation team, including a group of experts and accredited evaluators.

The awards encourage innovation amongst employees by ensuring the achievement of distinguished and pioneering services for customers, achieving optimal management and developing all operations, and recognises talents by honoring distinguished employees.
Continuing the journey of excellence and with the aim of achieving the Authority’s strategic objectives 2021-2025, related to leadership and competitiveness, Sharjah Airport will launch the second round of the Matari Awards to be in line with the new version of the Government Excellence System (Fourth Generation) (GEM2.0).

Achieving objectives based on encouraging innovation
The first ceremony of the Matari Award achieved Sharjah Airport Authority’s objectives by promoting a culture of institutional excellence by highlighting the standards of excellence to employees, as well as motivating them to participate in the award categories. The Matari Awards encourage innovation and create an added value for the Authority by ensuring the achievement of distinguished and pioneering services for travellers, in accordance with the best international practises.

A work style that stimulates continuous development
The Director of Government Services Department, winner of the Best Customer Service Award said: “Improving customer service and providing an exceptional experience to travellers is one of the main pillars on which the Sharjah Airport Authority’s strategy lies, as part of its mission to provide the highest standards of services smoothly and efficiently. We thank the Authority for its continuous efforts to provide a working environment that encourages personal development and improvement to keep pace with global changes in the field of services.

Appreciation for all efforts
In turn, Marwa Yousef Al Ali, winner of the Excellence Management Award said: “Excellence and encouragement of initiatives and innovation is the approach upon which the Sharjah Airport Authority is based, and it is a daily practice within a stimulating work environment that enables employees to reach their full capabilities.”

The Excellence Awards winners in the different categories expressed their pride in this achievement, which constitutes a motivation for continuing excellence and advanced performance, stressing that the award is an appreciation of their career in service of work, and an incentive to continue their efforts to improve and develop their work.

It is noteworthy that the Sharjah Airport Authority launched the Sharjah Airport Excellence Awards during the annual ceremony organized by the authority in March of last year 2020, to support and empower all of the authority’s employees to achieve the highest international standards, in order to achieve excellence and institutional leadership, based on 5 basic values: transparency, empowerment, professionalism, integrity and leadership.
-Ends-