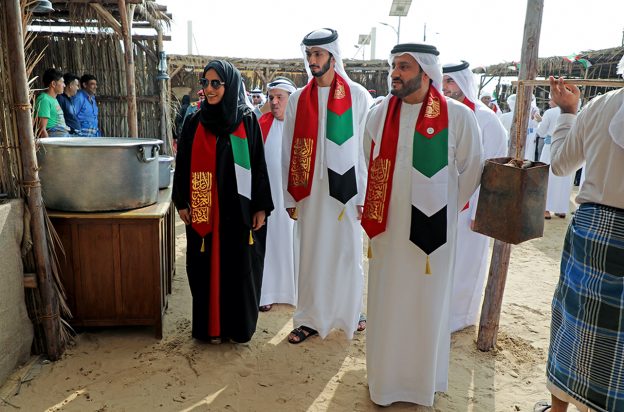 On Wednesday, the Department of Civil Aviation (DCA) and Sharjah Airport Authority (SAA) hosted a celebration for the UAE’s 47th National Day. The event was attended by HE Ali Salim Al Midfa, Chairman of SAA; HE Sheikh Faisal bin Saoud Al Qassimi, Director of SAA; employees from both organisations and representatives from public and private sectors working at the airport.

HE Sheikh Khalid Issam Al Qasimi, Chairman of the Department of Civil Aviation, Sharjah, said, “On the occasion of the United Arab Emirates’ 47th National Day, we offer our heartfelt congratulations to His Highness Sheikh Khalifa bin Zayed Al Nahyan, the President of the UAE; to His Highness Sheikh Dr. Sultan bin Mohammed Al Qasimi, Supreme Council Member and Ruler of Sharjah; to Their Highnesses the Rulers of the Emirates and the Crown Princes; and to the Emirates’ citizens and residents. The celebration of National Day encourages us to remember all that our beloved country has achieved in the past forty-seven years.”

He added, “The great achievements we see today are the result of the vision of the UAE’s founder Sheikh Zayed bin Sultan Al Nahyan, who established the country with a strong foundation and principles including unity, love and generosity, and of our wise leadership’s determination and vision. The National Day celebrations reflect the unity of Emiratis and their loyalty to the leadership. At Sharjah’s Department of Civil Aviation, we are keen to play a pivotal role in the aviation sector, to establish Sharjah Airport as one of the best international airports in the region and to add to our beloved country’s achievements.”

HE Ali Salim Al Midfa also offered greetings and congratulations to the UAE government and people on the occasion of National Day, saying, “Today, as we gather to celebrate the 47th anniversary of the founding of the UAE, we remember the founding fathers and their efforts, sacrifices and hard work, which have strengthened the cohesion between the leadership and the people. We are sending a message to the world, affirming our pride in the country’s past and present and our hopes for the future. With our love for our homeland and leadership, we pledge to move forward and to work to achieve goals.”

“On this great day in our nation’s history, we recognise the significance of the past 47 years’ achievements, made with the support and direction of our wise leadership. We are proud to be part of this legacy, which started with the founding father Sheikh Zayed bin Sultan Al Nahyan (may God rest his soul). We confirm our allegiance to our nation, our leadership and our people with this celebration, which showcases the Emirati people’s love for their country and its wise leadership. The UAE will continue to be one of the world’s leading countries with progress and prosperity in all sectors.”

He emphasised that Sharjah Airport established itself locally, regionally and internationally after the Union was founded, in line with the overall development in the United Arab Emirates.

The celebration was held in a ‘traditional village’ in front of the DCA/SAA building. The village featured shops, henna artists, folk songs and traditional food.  Employees won prizes by answering questions about the UAE history and Sharjah Airport milestones. The atmosphere at the celebration was festive, reflecting the employees’ pride and happiness.