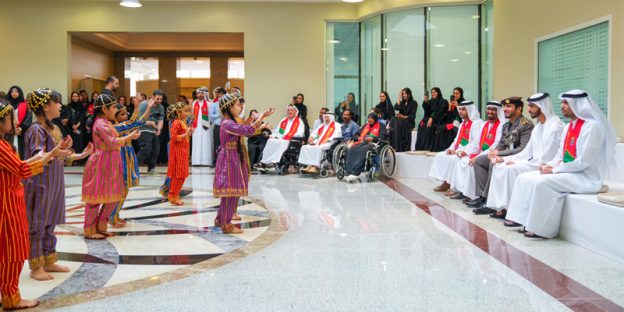 In the presence of His Excellency Sheikh Khalid bin Issam Al Qasimi, Chairman of Department of Civil Aviation, Sharjah, and His Excellency Sheikh Faisal Bin Saoud Al Qassimi, Director of Sharjah Airport Authority, Sharjah Airport Department of Civil Aviation and Sharjah Airport Authority (SAA) organised an event in celebration of the 51st National Day of the UAE. Employees of both the entities and representatives from various government and private sector organisations attended this event to celebrate the momentous occasion and pay tribute to the founding fathers of the nation.
The event featured Khorfakkan, a film written by His Highness Sheikh Dr. Sultan bin Mohammed Al Qasimi, which depicts the struggle and sacrifices of the people of Khorfakkan during resistance against the Portuguese invasion in 1507. The film further highlights the remarkable filmmaking ability of the UAE.
A number of competitions were held along with various events and workshops, and employees who performed exceptionally in the competitions were awarded with attractive rewards. Competitions included ‘Best Photo of Sharjah Airport Campus’ taken by an employee, ‘Best Emirati Meal’, ‘and a Javelin Throw’ competition organised in collaboration with Sharjah Shooting Club.
On this occasion, H.E Sheikh Khalid bin Issam Al Qasimi, Chairman of Department of Civil Aviation, Sharjah, said: “On the occasion of the 51st National Day of the UAE, we remember with pride and appreciation the early founders of our state under the leadership of the late Sheikh Zayed bin Sultan Al Nahyan, who laid the foundations for the advancement of the country and the establishment of the UAE. We also renew our loyalty to the nation and its founders for their efforts to realise the dream of the Union, and we pledge allegiance to our wise leaders to take confident steps towards the future on the same path, to keep UAE in the ranks of developed countries, and making new achievements that reinforce its position globally”.
H.E added, “The great achievements we see today are the result of the vision of the UAE’s Founding Fathers, who instilled principles of unity, love and generosity, and of our wise leadership’s determination and vision. We are feeling proud of our achievements in the preceding year and looking forward with hope and optimism at the coming years”.
He mentioned that with the recent announcement of the national plan and road map for the next 50 years ‘We The UAE 2031’, the wise leadership is keen to achieve greater heights, as this step will shape the future of the country within the next ten years with a focus on social, economic, investment and development aspects.
His Excellency Ali Salim Al Midfa, Chairman of Sharjah Airport Authority, said: “It is a proud day for us as a nation, as we honour the achievements of the union in the fields of culture, science, and economics. The UAE has achieved numerous milestones since its establishment and is now one of the pioneering models of growth globally. As we celebrate our 51st anniversary of a prosperous and fruitful journey, we remember our founding father, late Sheikh Zayed bin Sultan Al Nahyan, whose efforts paved the way for the tremendous developments that we witness today and is being further nurtured and strengthened under our wise leadership.”
Al Midfa added: “The UAE has been solidifying its position as a global economic, civilisational, and scientific hub, and serves as an ideal role model for safety and stability, which is further bolstered by our national unity. On this day, we commemorate the efforts by our founding fathers, and reaffirm our dedication to contribute to the development of the UAE and achieve an advanced and prosperous nation.”