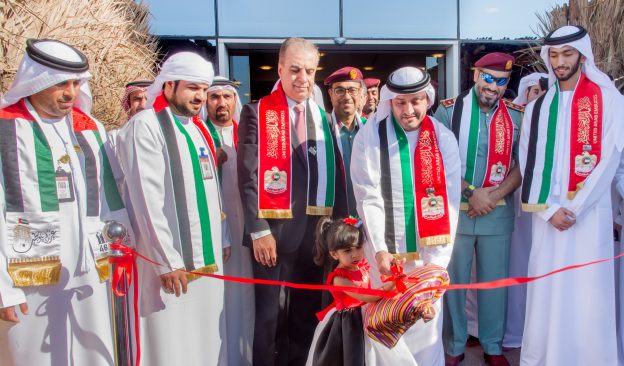 HE Sheikh Khalid bin Issam Al Qassimi extended best wishes and congratulations to HH Sheikh Khalifa bin Zayed Al Nahyan, President of the UAE, HH Mohammed bin Rashid Al Maktoum, Vice President of the UAE and Ruler of Dubai, HH Sultan bin Muhammad Al-Qasimi, Member of the Supreme Council and Ruler of Sharjah, and to all their Highnesses, Rulers of the UAE and UAE nationals. His Excellency said that National Day is a good chance to highlight the country’s achievements since the UAE was formed.

“Celebrating this significant national event reflects our interest in patriotic values and highlights the achievements and successes made by the UAE in different fields. It further highlights the most remarkable events in the history of our state with festive atmosphere that enhances working relationships between staff members and instills in them a sense of pride,” said HE Sheikh Khalid bin Issam Al Qassimi.

HE Ali Salem Al Midfa said: “Celebrating National Day is an opportunity to unify our goals and show loyalty to our beloved country. It demonstrates how strong were those principles established by Sheikh Zayed bin Sultan Al Nahyan (PBUH) and then adopted by our government under the leadership of HH Sheikh Khalifa bin Zayed Al Nahyan, whose vision we admire.”

HE Sheikh Faisal bin Saud Al Qasimi said: “Celebrating National Day reminds us of the forming of our country, when our founding fathers gathered to establish a civilized and advanced country. In fact, this memory has a special significance as it reminds us of all the accomplishments and efforts made by every UAE citizen with support from our wise leadership to sustain every element of a good and prosperous life.”

The event took place at a heritage village built for the occasion which included stores for antiques and Henna designs as well as traditional food. There were also folk groups who played music, and competitions for staff who won valuable prized. There was also a quiz on the history of the UAE and the most prominent events in the history of Sharjah International Airport.